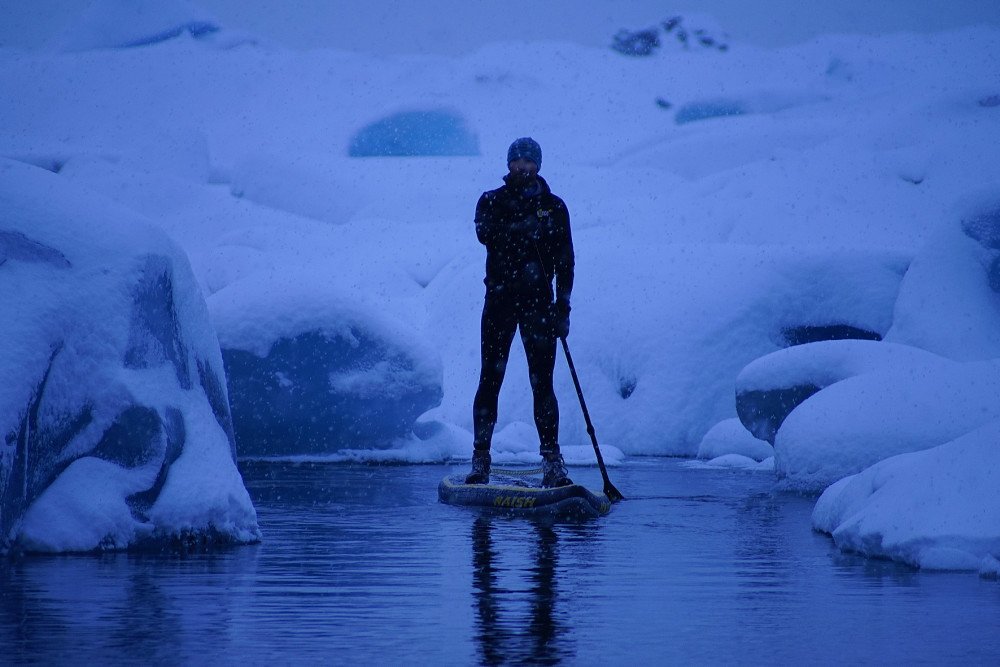 Everywhere we read, everyone we asked, all we heard was Iceland isn’t as cold as you think….

We arrived at the train station in Weymouth early. Bags packed, smiles on our faces and excitement brimming over. It was only going to be a short trip to Iceland over the  5 nights, but our itinerary was full of adventure and we hoped mind blowing sights…

After a frantic dash from work our hearts started to calm and pre holiday bliss began to enshroud us. It was then I suddenly remembered my fin. The one that was sitting on a bench in our store. The one that was 20 minutes drive from where we were. With 5 minutes until the train was due to depart there was no time to race back and save the day.

Settling into our seats I tried to console myself the board had only been an after thought. We weren’t really going to SUP. It didn’t matter, from the moment that I had read about  Jökulsárlón, a lagoon at the foot of the giant Vatnajökull  glacier and play pen for mini iceburg before they escaped into the sea, I knew I had to paddle there. Featured in James Bond, Batman and a whole clutch of big screen smashes Jökulsárlón was reputed to be beyond photogenic.

As we pulled slowly out of the station I knew I couldn’t let this go. The first desperate call went to Stu a friend who worked just up the line in Poole. Maybe he would have one in his van. No answer. Next a call to a Poole  based SUP shop, followed rapidly by an even more desperate one to another in Southampton. Maybe they could get a fin to the station. Both calls were greeted incredibly sympathetically, but no good, they didn’t have a fin for my N1SCO in stock. Both immediately suggested I call Callum in Weymouth. Sick to the stomach I had to explain we were heading away from Weymouth, that I knew Callum who is a friend of ours, and was well aware his shop 109 Watersports would be able to help me fine any fin I wanted.

Last chance, Active 360 in London. I rapidly explained the situation to a lovely girl at their base who immediately gave me the owners mobile. Shortly later a plan was hatched. We would detour across London, meet at Kew Bridge and then taxi up to Heathrow to make it just in time for our flight. Clockwork it wasn’t quite, as the trains weren’t running to schedule. Never the less a hero was realised in the owner of Active 360. Well after he should have been home and free from work, he pulled up at the station on his bike, fin in hand, grinning. He had already pre booked a taxi for us and shortly later we pulled up to the airport with time to spare.

A brief 3 hrs flight and we were in Iceland. Car collected we finally arrived at our hotel at 1:30 a.m. Me relieved to have a chance to paddle an ice lagoon and Katy relieved to have a narrow escape from a severely grizzly boyfriend.

The next day we pottered around Reykavik,  drank coffee, ate salted cod, got laughed at for wearing flip flops as the first light snow danced around us, and generally mooched to our hearts content. A lovely city, especially when decorated in glittering Christmas lights and encircled by snow frosted mountains. The perfect place to catch your breath before heading out into the wilds of Iceland.

The next morning we were up and driving well before day break. Although when the sun doesn’t rise until 10:30 during the winter, that isn’t too much of a challenge. We brushed the snow from our little car and cautiously headed out through the ice. It is astonishing how the temperature drops as you leave the coast and slowly climb into the hills. By the time we pulled up at Thingvellir National Park into thick virgin snow our thermometer read an easy -13°c. Now I may admittedly come from the South Coast of UK, and I do head further south as soon as the winter rears it’s head each year, but I am sure in anyone’s book, -13°c is cold. The realisation that I would be SUPing in this 24 hrs later left me a little nervous.

Thingvellir is the most sacred place in Iceland, it is the home of their first parliament. More impressively it is a place you can walk between the two tectonic plates of Europe and America, gently absorbing a sense of earth’s power, and the forces capable of driving these two great plates apart carving our landscape from solid rock. Awe inspiring.

Next on the list was Gullfoss, reputably one of the most powerful waterfall in Europe and not somewhere to SUP. The spray it intense and the vapour instantly freezes to your hair and clothes. Icicles hang from the rugged cliffs around the falls and the snow capped hills do nothing to lesson the wild atmosphere.

Last stop of the day, and no less impressive, a sulphurous,  steaming geyser. Actually home of, “The Geysir”, for whom all others geyser are named, this is an area of boiling pools of water churning between snowy boulders. Although Geysir no longer blows, his sister Strokkur does. Almost to clockwork every 10 minutes she erupts and for a moment the sun dances through the vapour and multiple rainbows appear accompanied by whoops of joy from onlookers waiting eagerly at her base.

After a drive back across the hills we rolled into our next place of rest. A wooden hut, pre warmed by our hosts, petite but cosy, and just perfect for our needs. We slept to dreams of rushing water, snowy wilderness and a land of extremes.

As the sun clambered over the horizon the next morning we were already negotiating the road that follows the coast to the south of the Island. Despite more new snow the roads in Iceland are a joy. Quiet, well maintained and groomed daily by thundering snow ploughs. The biggest risk of leaving the road is because you are transfixed by the majesty of the glaciers and mountains, entwined by gushing streams and waterfalls and boarded by the ferocious North Atlantic exploding into every inlet.

As we pulled up into the small car park next the Jökulsárlón Lagoon. My heart was in my throat. I can’t describe how stunning this place is. The intense blue of the ice, crisp white of the snow, inky depths of the lake and occasional slate grey head of an inquisitive seal. All we could do for some time was stare, jaws slack and emotions buzzing.

Eventually we shook off our stupor of wonder and I trudged through the snow to do the wetsuit shuffle in the front of the car and grab my board. As I pumped up the board my breath misted in front of me reminding us how cold the water was. Tiptoeing between small boulders and large lumps of ice I pushed the board out tail first and gingerly hopped onto the nose. Despite the mirror like water I wobbled as I climbed to my feet. Once clear of the shore and up right I was relieved, and with a little more confidence pulled my paddle through the water and glide out into the maze of twisted ice and gentle mist.

I have to make this very clear, paddling between iceberg no matter how small they are is dangerous. It is not something to be done without consideration. As you negotiate the intricate corridors you can hear the ice creak and groan as they rub against one another. Occasionally small chunks shear from their sides and float away in the gentle current destined for the ocean. One such lump glanced of my tail making me wobble a little. The larger burgs can roll unpredictably due to their asymmetric profiles and so a safe distance should be maintained between you and them.

Occasionally there are areas of semi frozen slush through which it feels like you are paddling in treacle. A gentle current in the lake is enough to keep you on you guard. This is especially so near to the head of the short river down which the ice will eventually escape through foaming rapids and onto the pounding coastline.

Seals were fascinated by my board. Initially they were hesitant, but as they grew used to me they danced closer and closer, playing hide and seek between the ice. One in particular played just off my nose, twisting and frolicking, obviously hoping I was a playmate.

I stayed out until my extremities could take it no longer. My fingers and toes throbbed and my body trembled with the cold as I pulled myself onto the shore. I was greeted by a local policeman gently shaking his head… “This is very dangerous”. “I know” I sheepishly responded. “I was really careful”. “The water is very cold”. He said. “I am wearing a good wetsuit”. He shook his head. “Hmmmm. The water is very deep”. ” I am wearing a leash and am a strong swimmer”. “But it is very dangerous”, he re enforced as he trotted off shaking his head. Apparently I wasn’t doing anything wrong. Just a little unexpected.

One last night in our hut, and then a blissful day of Icelandic coast, more waterfalls and glacial beauty. The day finished with a leisurely dip at the Blue Lagoon thermal spa. A natural spring with reputed age combating powers, but at minimum the power to relax and warm weary limbs in its soothing waters. We should have been content. But we couldn’t tick off the full house for Iceland. Cloud each night had scuppered our dreams of seeing the Northern Lights.

That night someone was smiling upon us. As we drove back to our last hotel the stars shone brightly unhindered by mist or haze. After dinner and packing our bags in preparation for an early flight, we headed out, driving into the night and snow. Determined to see the Aurora Borealis or freeze trying, we crossed our fingers and hoped for the best.

After half an hour Katy told me to pull over, she had spotted a cloud which didn’t quite add up. It was very slightly green and seemed to shimmer and wonder across the sky even as we gazed at it. “Is that it? That must be it surely?”, she murmured. We watched for some time, satisfied we could at least go home successful aurora hunters. We drove another 10 minutes down the road to try another vantage point. As we clambered from the car the heavens ignited. I can honestly say I have never seen anything so intense. From barely noticeable the green became more intense and then erupted into a blistering display of colour and dazzling dizziness. So powerful was it that at one point I remember ducking, as it felt as though the sky might implode. 30 seconds later it had gone, shimmering, reverted to a subtle ethereal haze, resting just over the skyline.

I can honestly say Iceland has taken my breath away. Whether you go to SUP or not I promise you it won’t fail to reward you. I have never encountered an environment so raw and so intensely stunning. We are already planning our next trip.