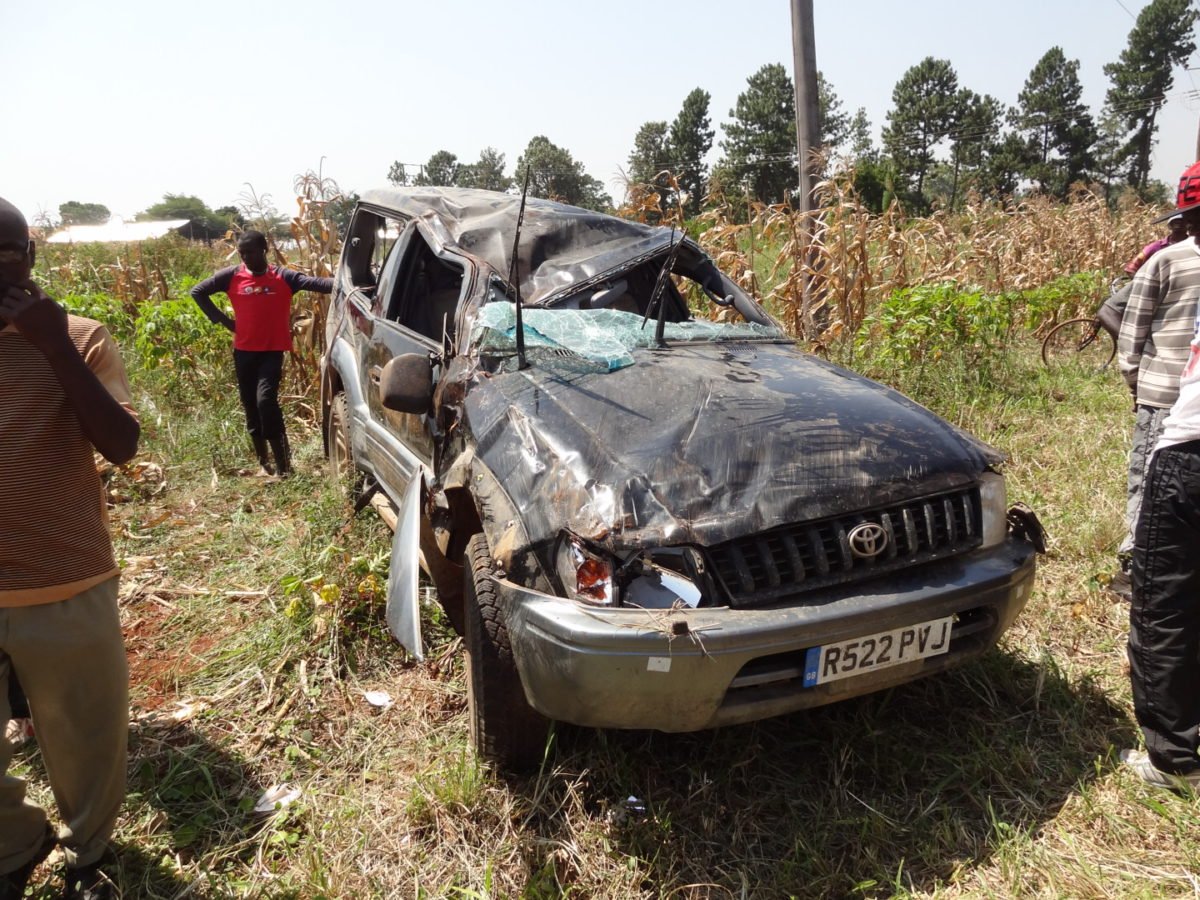 From the shelter of a room at a small hotel near to Entebbe airport Uganda, we finally managed to find internet strong enough to Skype home. I had removed the simple dressing from the wound, ready to replace it with dressings from our first aid kit which I suspect was far more comprehensive and suitable than the clinic had to hand. The wound was weeping heavily, the whole arm red, swollen and hot; the erratic stitches made with cord probably more suitable for shark fishing. I knew that the clock was ticking. We needed to get to a sterile environment, and preferably the comfort of the UK as soon as possible. As my Doctor sister in law inspected the wound via Skype, advised on dressing and cleaning, and tried to settle our fragile nerves, she joked that there had been another comparison between the NHS and third world medical facilities. The people who write these incredulous articles and present their ill informed opinions need to do some more research. Maybe if their horizons were broader than our home shores which shelter their bloated egos, they may think twice before making such uneducated comments.

Our story started 36 hours earlier, when after a front end failure in our Toyota Landcruiser, we suspect a faulty tie rod, our car went totally out of control. A light dab of the brakes resulted in a screech of rubber, metallic bang and a heavy lurch to the right. I struggled to correct and immediately the car veered in the opposite direction. An even more exaggerated pull right and I knew we weren’t going to walk away unscathed. Now with both hands on the wheel, I dragged the car back left, aimed it off road between a pylon and a small huddle of local farmers and shouted, “Hold on”, to Katy.

As the car entered the small roadside ditch the front compressed, the rear end slid in the red African dirt and the driver’s side wheels left terra firma for the first time. The initial roll was fast and disorientating. The second caused the roof to begin to cave inwards. I felt the the weight of the car through my neck and shoulders and heard Katy scream. The third roll was slower and the roof collapsed inwards. I remember thinking if we rolled again, we wouldn’t be walking away. The tumble stopped one rotation short of landing back on our wheels.

Katy hung from her belt above me quiet, but clearly alive. After a rapid assessment of my own capabilities I headed for the only exit available to me through the crumpled frame of my side window. Half way through wriggling free I realised I was stuck. The belt I suspect saved my life now kept me tangled in the wreckage. It was at this point the first locals arrived, immediately grabbing my arms ready to drag me free. With my spine and neck by no means unscathed, I screamed for them to let me go. I frantically looked round to see if one of my knives was within reach amongst the wreckage surrounding us. From amongst the swelling crowd a knife appeared and suddenly I was free and able to haul myself to my feet.

Katy was now understandably sobbing. A group of local lads braced themselves to roll the truck onto it’s wheels. Again I screamed to stop, scared the jolt may finish the work of a possible undiagnosed fracture to her back. I peered in on Katy looking for visible injuries. Satisfied she was at least able to move and responsive enough to cry, with the help of the villagers I proceeded to kick the remainder of the front window in, cut her belt and help her climb free. Trembling but alive, chaos ensued around us. Half the village intent on stealing what they could, the rest trying to stop them. Over the next few moments, a pair of brothers appeared with a van, most of our possessions were protected and loaded, I had a fiery encounter with a young man demanding a reward for helping, my wallet was pick pocketed, but finally we were on board with our gear. It was only a few moments to the nearest hospital and assumed safety.

We are acclimatised to Africa travels. Anyone who loves this continent must accept its inadequacies alongside its beauty. The small hospital clearly wasn’t as you may expect if at home in the West. However the staff were welcoming and some security was a relief. With a clear laceration, jagged and full of debris on her elbow Katy was first to be attended to. Things started well. With apology we asked to see all needles and sharps as they were unpackaged. A drip was inserted competently and a dose of antibiotics administered. X rays were taken and a possible fracture identified in the blurred slides. Then things started to deteriorate. The reusable, apparently sterile tools were wheeled out rusty and dull. A bottle of iodine and bottle of meths emerged. Latex gloves were pulled on. An old apron was laid over the bedside to catch any lost fluids. It was quickly apparent the wound was clear to the bone. A few local anaesthetic jabs were administered around the wound, the first injection nearly given empty, and air rather than numbness delivered. Thanks to a second pair of eyes this basic mistake was avoided and grumbling, the doctor continued. I can only compare the ensuing few minutes to how I imagine front line surgery must look. Katy writhed, gritted her teeth, and clenched my hand as the wound was peeled back, a purple bottle of meths poured in and a gauze used to scrub away like a washing up scourer on a stubborn pan. Bone clearly visible the doctor muttered, “Endure, just endure”, as Katy came close to passing out through the pain. Eventually free, Katy lay sobbing and quivering, trying to protect her elbow from any further trauma.

By this point my neck and back were throbbing brutally. My examination was next. The doctor peered at me from the corner of his eye as he tidied the mess left round Katy and made his assessment. The nurse was sent to get a pain killer and tube of gel which she fetched diligentely. We were left on our own as the doctor wandered off to draw up our bill and report. Katy rubbed the anaesthetic gel across  my shoulders with her free hand.

We paid our fees, received our non descript medical report, but just as we were about to leave our doctor decided he wanted to see me again. “So Alex, maybe you should leave us a little something…” I smiled, thanked him for his help and walked out.

It was 5 days from the crash before our insurance company got us home and we checked straight into Dorchester Accident and Emergency. In the meantime there was a panicked Skype call home to my wonderful sister in law for medical advice. A ridiculous drive back cross country to Kampala and a second hospital, at 120 km per hour in the Ugandan equivalent of an ambulance, to satisfy the demands of our insurance company.  When realising I had a painful neck the ambulance crew sat me upright in the front so I was comfortable. More prodding. Finally some proper X rays and an abdominal scan that indicated a swollen liver. By this point it was 48 hours since the crash and the general consensus was we were alive so probably free of any terminal injuries. Eventually we made our way back to our hotel, an hour and a half from the hospital.

By the time we were home in the UK Katy’s wound was well and truly infected. I am told during surgery and upon reopening the wound, a variety of debris was discovered. Yet from the moment we stepped over the hospital threshold our nerves settled and we knew everything would be OK. The UK has some of the best healthcare in the world and we are all tremendously lucky to be able to access it. Katy continues to receive treatment in Purbeck Ward of Dorchester County Hospital. All staff from surgical team to reception staff have been a shining example of best practice for hospitals across the world and an illustration of the privilege UK citizens benefit from.

I should clarify I am incredibly grateful to the nurses and doctors who saw us during our Ugandan roller coaster ride. Most were charming, helpful and dedicated. Yet without proper training and access to the luxury of our western resources, there is only so much anyone could ever expect. Next time you read an article from a rag reporter or listen to a self serving presenter, intent on capturing an audience rather than delivering fact, slating our health service, and criticising our hospital staff, smile, take a moment to thank your lucky stars that you don’t live in a real third world country, and consider yourself privileged to have access to the NHS.